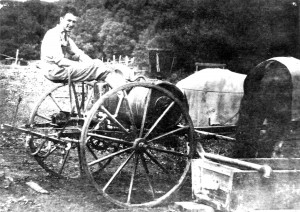 Before Fargo and Moorhead existed, settlers Randolph and Catherine Probstfield started a farm on a piece of high ground about three miles north of here.  They called the spot Oakport, and here they grew vegetables to feed the towns that grew south of the farm.  In Randolph’s last years, he took his young grandson Ray Gesell on his knee.  He told the boy that that this land was the best in the world and he wanted Ray to take care of it one day.

Raymond Gesell moved onto the Probstfield farmstead in 1916, when he was 19 years old.  He came to help his Aunts Millie and Josie Probstfield and Uncle Andy Probstfield.  Ray became the driving force behind the Probstfield Farm for the next half century.

4626 Oakport Street N
Moorhead MN 56560
(no phone number)
info@probstfieldfarm.org
No set hours - see calendar for activities
Contact for tours or other use